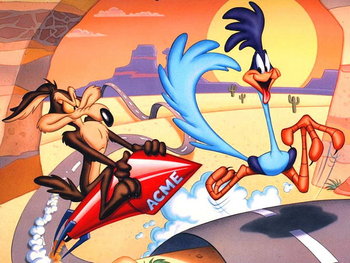 Road Runner, the Coyote's after you! Road Runner, if he catches you, you're through!
Okay, right now I'd like to show you one of my favorite cartoons. It's a sad, depressing story about a pathetic coyote who spends every waking moment of his life in the futile pursuit of a sadistic roadrunner, who mocks him and laughs at him as he's repeatedly crushed and maimed! Hope you enjoy it!
—George Newman ("Weird Al" Yankovic) effectively summarizing the cartoon in UHF.
Advertisement:

Basically, this is what happens if Tom and Jerry was set in the desert, and replaced with a Coyote and a Road Runner... and much less successful for the chaser.

. The dart bombs? Go after him and thwart subsequent attempts on Beep Beep. The metal plate to block the road? Doesn't pop up until several tries later, when the Coyote is running. A springy block of pavement serving as an ejector? Comes loose when the bird stops by it and squashes the Coyote. Jones explicitly modelled the Coyote's seemingly inexplicable persistence on philosopher George Santayana's definition of a fanatic: someone who "redoubles his efforts when he has forgotten his aim." And it doesn't help one bit that the Road Runner is apparently aware of this and more than happy to exploit it to his own, cheerfully sadistic ends.

Despite their surreally minimalist production design — very unlike the traditional Looney Tunes style — and penchant for formula gags, the shorts have remained hugely popular to this day. 40 shorts were produced in the classic era, and newer ones are still occasionally being created for theatres. Wile E. even went up against Bugs Bunny himself in a few shorts, and proved to be just as unsuccessful as trying to get the better of him as he was with Road Runner.

Their character sheets can be found here.