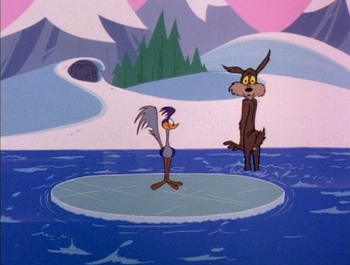 Wile E. Coyote thinks catching Roadrunner will be easy when he learns that "road-runners hate snow and are easy to catch in snow drifts." After the snow machine he tries to use to cover the desert with snow fails, Wile E. switches the signs to the desert crossing and snowy summit. But even when the bird reaches the snow summit, the coyote has no luck catching him. Between jet-powered skis, a pack of sled dogs, and the building of a giant snowball, things are no better.