Western Animation / To Beep or Not to Beep 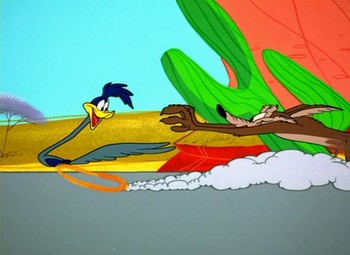 This time, the Chase Scene doesn't begin the cartoon.
"To Beep or Not to Beep" was a Wile E. Coyote and the Road Runner Merrie Melodies cartoon released at the end of 1963. Almost all scenes except the very opening and The Reveal at the very end were taken from the 1962 full-length TV pilot Adventures of the Road Runner, for which Milt Franklyn (who had since died) composed the music. This cartoon is therefore notable for having two standalone versions, each with their own distinct musical scores (with the William Lava score being more familiar to viewers), and for having no instances of an explosion / Ash Face at all.
Advertisement:

The cartoon begins with the coyote perched on a stump reading a "Western Cookery," when the Road Runner moves up behind him to find out what's in the book. This is followed by their usual antics, which involve a lasso in the road, a large Spring Coil attached to a boulder, a construction crane, and an ever-backfiring catapult.

To Beep or Not to Beep

Wile E. Coyote has a lot of trouble getting his catapult to work properly against the Road Runner.

To Beep or Not to Beep

Wile E. Coyote has a lot of trouble getting his catapult to work properly against the Road Runner.