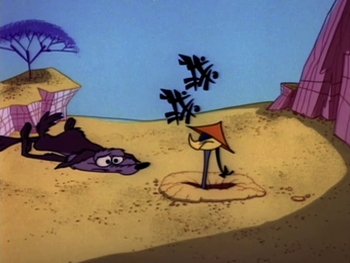 "War and Pieces" is a 1964 cartoon featuring Wile E. Coyote and the Road Runner.

Everything goes as well as it usually does for the Coyote, starting with a chase scene where he's carrying a hand grenade. The Road Runner outruns the explosive little thing, which (as he turns a corner of the road) ultimately bounces off a cactus and flies right back into the Coyote's face. Now covered in cinders, the Coyote goes off to ponder his next play. Between a bow with a rope tied to his hide on a pulley, a hydraulic press activated by an electric eye beam (the closest the cartoon gets to a case of Homing Boulders), a can of invisible paint, a shotgun disguised as a peepshow, a grappling hook, and a mini-rocket that somehow tunnels all the way into China, the Coyote's Butt-Monkey status reigns supreme.

It is noteworthy for being the last classic-era Looney Tunes cartoon for Chuck Jones (whose next project would be The Dot and the Line at MGM).

Not to be confused with the Roland and Rattfink cartoon of the same title (1970) or the Taz-Mania segment entitled "War & Pieces" (1991).