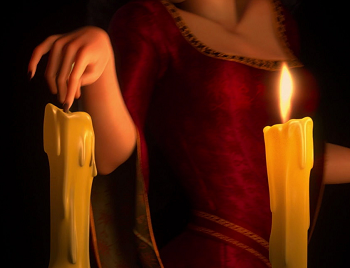 When you need to get rid of a small flame, sometimes blowing it out isn't gonna cut it. Perhaps it's out of reach, or blowing it might cause a mess. So your next best idea is to get rid of it with your hand. Characters may do this through using a wet hand or simply doing it with them bare.

This trope can be Played for Laughs or used to show how strong a character is. After all, touching fire is the ultimate strength test. What makes this funny? Well, sometimes a character thinks they can extinguish a flame with their hand to show how cool they are... and then they fail hilariously.

Another way this trope is played for laughs appears in cartoons with a horror or suspense veneer: the hero may be in an old castle or haunted house, and they hold up a candle or torch as the monster stares them down...only for the monster to grin heartily and put out the torch with a mere pinch.

Obviously, this is way more common in an animated format, as doing it for live action would require the actors to do it themselves, which, as mentioned below, is a risky endeavor. While it's unlikely that trying this would result in extreme burns or death, the heat can easily blister your fingers, which can cause filming delays and put productions behind schedule. So it's generally best left to the toons.

In Real Life, pulling this off without burning yourself

requires you to lick or dampen your fingers to protect them from the flame, and to avoid holding the wick too long. Some people can even do it with dry fingers, although it takes a lot of practice before they can get the timing right.

Can apply to Macho Masochism. Not to be confused with Finger Snap Lighter.