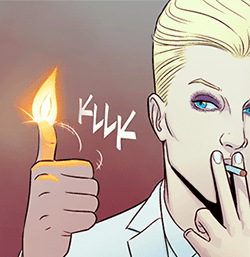 One fun way to Play With Fire is to coolly light your cigarette, cigar or pipe with a finger snap in an extravagant show of Mundane Utility. Of course, the power to hold flames in your hands can also be a potent intimidating gesture. Usually this is done by holding the palm open and facing up. Much like the Super Power equivalent of cocking the trigger on a gun, this is dangerous because it's just one step shy of firing it. Also, it looks really cool.

A few other variations apart from the finger snap and palm up are when one or both hands are held overhead and an Energy Ball is hovering over them, and the "crucifixion", which has the energy shot to the sides in a shower.

This doesn't just apply to fire powers, but any hero or villain with energy- or light-emitting powers can use these poses or simply using friction. If they can spread the flames to their entire body, they are Wreathed in Flames. This has nothing to do with Finger Extinguisher.