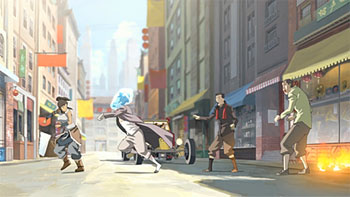 "Republic City does need you. But it needs me, too."

The first episode of The Legend of Korra.

Like its predecessor, we begin with narration. Tenzin, son of Avatar Aang and the last airbending master alive, tells of how his parents and their friends ended the 100-year war and brought peace to the land. Avatar Aang and Fire Lord Zuko turned the former Fire Nation colonies into the United Republic, and made Republic City their capital. Since then Aang has passed away, but like the seasons, the cycle begins anew.

We appear over fields of ice at night, with lights of a village leading the way. Three members of the White Lotus have come to investigate claims that the new Avatar has been found. They are skeptical- this is not the first time someone has claimed their child to be the Avatar; however, when we see little Korra, only four and already bending water, earth and fire, it becomes clear. She is "the one." The White Lotus takes her away to be trained nearby.

Flash forward to the current day; she is in a fight with a fire bender for her final exam. Having passed her final fire exam (despite grumblings that Korra is still rather rash), Tenzin arrives only to tell Korra he cannot stay to teach her as he has more pressing responsibilities in Republic City.

Disappointed, the next night she escapes to seek Tenzin out, with the blessing of an elderly Katara. She stows away on a ship and arrives in Republic City, where she soon finds she is a fish out of water, with no money or idea of how the city works. After beating up a few Triad members, she is arrested for causing more damage than they did.

Here she meets Chief Lin Beifong, Toph's daughter, who is unimpressed by her attitude or her title. After a short talking-to, Tenzin shows up to bail her out and promises that she will be sent back to the South Pole. Just about to send her off on a White Lotus ship back to the south pole, Tenzin changes his mind, resulting in Korra picking up all three of his kids and then him in a massive hug.

Shortly after, Korra announces both her status as the Avatar and presence in Republic City at a press conference. Listening to this on the radio, a man in goggles asks a masked man (Amon) about his intentions. Amon turns to him, stating that since the Avatar has arrived early, they'll have to speed up their plans...