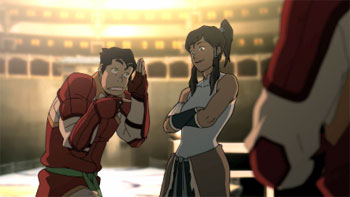 The second episode of the series The Legend of Korra.

Now officially situated on Air Temple Island, Korra is engrossed reading about the Pro-Bending matches going on in Republic City. Excited about it, she tries to convince Tenzin that it would be fun to go see one, only for Tenzin to tell her that the sport is a mockery of the noble tradition of bending in all its forms; to which Korra attempts to persuade him to let her go see one because she has dreamed of seeing a Pro-Bending match for years. Tenzin refuses, and insists that she must only remain on the Island.

And so Tenzin and Korra begin their airbending training. Korra does horribly. Korra accuses Tenzin of being a bad teacher in a fit of anger, and later that night sneaks out to watch the pro-benders.

Arriving at the Pro-Bending Arena, Korra is quickly caught sneaking around by Toza, the arena's caretaker and ex-pro-bender. An argument begins, only for a young man in pro-bending attire to arrive and vouch for Korra. He introduces himself as Bolin, earthbending member of the Fire Ferrets, and invites her to watch the upcoming match at their private lockers. Bolin then shows Korra to the other members of his team: his older brother, the brooding firebender Mako, and their waterbender Hasook. Korra watches with amazement as all three, Mako in particular, win the match. Mako scolds his brother for bringing fangirls in. After the match, Korra and Bolin discuss her learning a few moves, and Mako realizes that the fangirl he was so short with previously is the Avatar.

Meanwhile, at Air Temple Island, Korra is still doing poorly in airbending. Most of her attention is still at the pro-benders, such as when Mako and Bolin show her the basics of pro-bending during their practice session. Korra sneaks off Air Temple Island again to see the Fire Ferrets' next match. Tenzin, eating dinner with his family, curses Korra's sudden impulsive disappearance.

The Fire Ferrets find out that Hasook is a no-show for their match; without a waterbender, the Fire Ferrets automatically forfeit and the winnings Mako dreamed of are gone. Korra suggests entering the match herself. Mako is strongly opposed to this idea but impulsive Korra suits up despite his protests. Tenzin continues to look for Korra around the island, eventually coming to several White Lotus soldiers listening to the pro-bending games via radio. Korra, initially making several fouls from not having a grasp of the rules of pro-bending, accidentally uses an earthbending disc to block an attack. This reveals her as the Avatar to the entire viewing and listening audience, Tenzin included.

A livid Tenzin goes to the arena to bring Korra back. With the Fire Ferrets losing, Korra protests that she needs to help Mako and Bolin. She returns to the ring, refusing to argue more with Tenzin. Tenzin is about to leave when he sees Korra using the spiral motions he and his children had tried to teach her before. The advantage the other team had over the new bender is gone, and they exhaust themselves trying to knock her out. The brothers then make their move and score the win by taking the whole team out in one move!

That evening, Tenzin tells Korra that, surprising as it is, the modern style of pro-bending, as Korra suggested, helped her to learn how to move like an airbender. Korra uses this moment to, in an aside, note how she decided to join the Fire Ferrets full time. She runs off, leaving Tenzin exasperated. The episode ends with Mako gazing out at Air Temple Island and Korra staring dreamily across the bay at the arena.