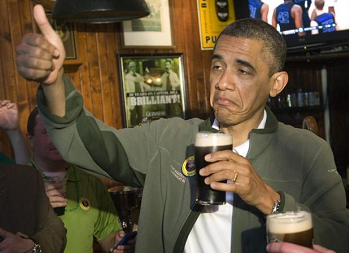 Thanks, Obama.
Mako: Not bad.
Korra: Ugh, what does it take to impress this guy?
Mako: What? I said "not bad".
— The Legend of Korra, "A Leaf in the Wind"
Advertisement:

When someone refers to another as "Not Bad", it's used to show that the person of whom it is said has won the (albeit grudging) respect of a character who initially hadn't liked them.

A variant of this is when a character refers to another as "Not Bad For An X", which is usually said by a character who normally looks down on another group except for the other character. This variation is often what a supposed Superior Species would say to our plucky human hero whose proven themselves worthy in their eyes.

This is often used by people whose approval is hard to come by and expressed in terms that don't seem all that approving if you don't know them. Deadpan Snarkers are the most frequent abusers of this trope, because outright complimenting someone is out of the question for them. It's also a characteristic of The Stoic, The Spock (because his standards are just that high), people with a Stiff Upper Lip (a British person saying "not bad" may actually be an expression of unbridled approval).

By the way, saying "not bad" instead of just straight up "good" is one of many examples of what's called litotes

See also Compliment Backfire, Damned by Faint Praise, Overly Narrow Superlative, and The One Thing I Don't Hate About You. For the humorous counterpart, see Actually Pretty Funny.

Alternative Title(s): Not Bad For An X