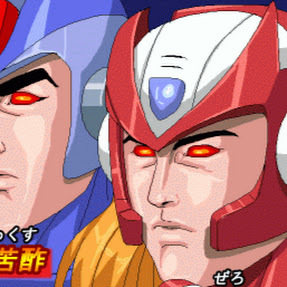 pokecapn is a Let's Player from the Something Awful forums. His LPs usually contain guest commentary from his friends: medibot, Kung-Fu Jesus, IlluminatusVespucci, NoTimeForSocks AKA Condit, and MyNameIsKaz. pokecapn is most well known for his Let's Play of Sonic the Hedgehog (2006). Afterward, he and his friends pursued Let's Plays of other Sonic games, as well as a board from each Mario Party.

, and formerly their own site, DiscoShiny, which is now defunct and Viddler, which while it hasn't gone defunct yet his videos are no longer there.

He also did some livestreams of the Metroid Prime trilogy, as well as a whole bunch of Xbox Live Indie Games, which disappeared with the collapse of KFJ's website.

Twisted Pixel commissioned him and the Posse to do commentary on their Kinect game The Gunstringer, making him a Promoted Fanboy of sorts.

Notable games they have LP'd as a group:

They also livestreamed assorted games to raise money for new recording equipment, in an event called "Stupid Games Done For Money." The LP's have been posted here

If you're looking for the Sonic the Hedgehog 2006 Let's Play, it's on a separate page.