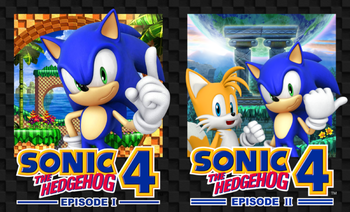 As you truly imagined it!
Advertisement:

Sonic the Hedgehog 4 (not to be confused with the SNES unlicensed bootleg game) is a side-scrolling platformer developed by Dimps that is a modern-day throwback to Sonic's roots on the Sega Genesis. It's an Episodic Game, with only two episodes released, though having both episodes downloaded unlocks a short interquel. Each episode has four Zones with four Acts each (three standard levels and one boss fight per Zone), plus a final Boss-Only Level in each, making for a decently-sized downloadable game that Sega initially designed to test the waters for classic Sonic's return.

The story is simple: Some time after the events of Sonic 3 & Knuckles, Mad Scientist and aspiring world conqueror Dr. Eggman seeks revenge on his perpetual arch-nemesis by rebuilding his best Badniks to go on a hedgehog hunt. When Sonic smashes Eggman's creations once again, he retreats into space, and Sonic gives chase on a rocket. In his floating E.G.G. Station, Eggman pulls out the Death Egg Robot as a last resort, but Sonic trounces it the same as always.

After this defeat, Eggman gets the idea to return to Little Planet, where Metal Sonic is still smoldering from his previous battle. He repairs the busted bot, and roboticizes Little Planet to create the Death Egg Mk.II, continuing his assault on the world. Hearing about this, Sonic partners up with his good buddy Tails and flies into action once again to stop his doppelgänger and save both planets.

Episode I was released on iOS, Wii, PlayStation 3, Xbox 360, PC, and Android. It was hyped as a form of Revisiting the Roots for the series, with the classic gameplay of the original game and no characters beyond Sonic and Eggman; this is reflected in its codename, "Project Needlemouse".note The name comes from "Mr. Needlemouse", a common mistranslation of Sonic's working name, with the Japanese word for "hedgehog" (ハリネズミ) being literally translated as "needle-mouse". However, the game uses a modified version of the Sonic Rush engine, which means the game plays quite differently from its classic counterparts, being twitchier and more fast-paced instead of momentum-driven.

Episode II officially launched on May 15, 2012 for PC, PS3, Xbox 360, Android, and iOS platforms.note The near-final "Beta8" was accidentally released to pre-orderers through Steam on April 21, 2012 at midnight EST. It featured an improved graphics engine (which kept it from releasing on the Wii since it wasn't powerful enough) and tweaked the physics engine from Episode I. Metal Sonic returns as a recurring boss, and Tails follows Sonic everywhere just like in Sonic the Hedgehog 2. He also allows for three new team-up moves: flying, swimming, and a barreling cannonball spin attack. Having a Episode I save file on the same platform will unlock Episode Metal, a four-act mini-episode starring Metal Sonic.

Due to lower-than-expected performance of the series, Episode III was cancelled

, with its development team having little faith that the project will be revived. The later Sonic Mania eventually took the position of being a direct sequel to Sonic 3 & Knuckles, albeit in the Alternate Continuity for Classic Sonic established by Sonic Generations.