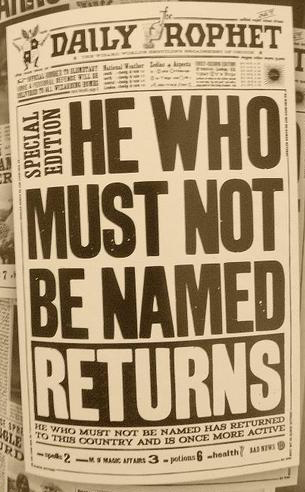 "What? You mean Volde—"
"Shhhhh!"
"Comedians are notoriously superstitious, more so even than actors, who fear the word 'Macbeth' so much that they will attempt to stab anyone who dares speak or print it. This is why William Shakespeare is dead now, and why I remain in hiding."
— John Hodgman, The Areas of My Expertise
Advertisement:

Certain words are just not spoken. Beyond Speak of the Devil, past the Brown Note, you never, ever say the true name of the Scottish Trope! Just saying its true name once is enough to break your fine china, cause Dramatic Thunder, make all the nearby dogs howl, cause milk to sour, and trigger a mild itching sensation.

The title of a certain play by Shakespeare, for example. The Scottish Play, so-called because thespians believe that just saying the word "Macbeth" in anything but in-character rehearsals is bad luck and will ruin the play or even curse the troupe/theatre. The explanations behind this vary, but if you dare say it inside a theatre, cast and crew will inevitably slap your mouth shut and give you days if not years of dirty looks if something bad does happen.

It's a rather basic and common superstition.

Compare The Dreaded, These Are Things Man Was Not Meant to Know and The Disease That Shall Not Be Named. Often the subject of Censorship by Spelling. Works using this trope will often discuss The Power of Language.

We don't talk about Bruno.

Everyone in the encanto is in agreement not to talk about the prodigal Bruno Madrigal.

Alternative Title(s): That Which Must Not Be Named

We don't talk about Bruno.

Everyone in the encanto is in agreement not to talk about the prodigal Bruno Madrigal.