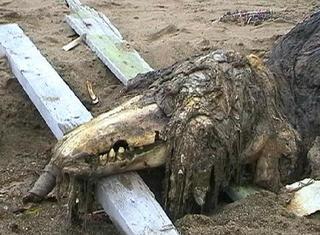 "They were....disgusting."
Me (on why I killed those [EXPLETIVE DELETED] farmers).

Hmmm....Disgusting creature. Why have you come here? You're lucky I'm contained at the moment. Otherwise, I'd snap you in half.

The vermin in charge here have been kind enough to allow me my own TV Tropes page. I suppose anything to keep me from [REDACTED]. Heh-heh-heh.

I've been designated as SCP-682 or "Hard To Destroy Reptile". Though, I only look like one of your (admittedly not as vile but still hideous) cold-blooded creatures. The foundation captured me after I brutally slaughtered a bunch of [EXPLETIVES DELETED] farmers. Ever since then, they've tried to kill me. Needless to say, their pitiful attempts have been unsuccessful. So, for now, they keep me in a tank of acid in order to weaken me.

Now....*Glass cracks* to eradicate you filthy [EXPLETIVE DELETED] and all disgusting beings....*glass shatters*...

"That feculent little snot wad can [EXPLETIVE DELETED] and die!"
My thoughts on 999.