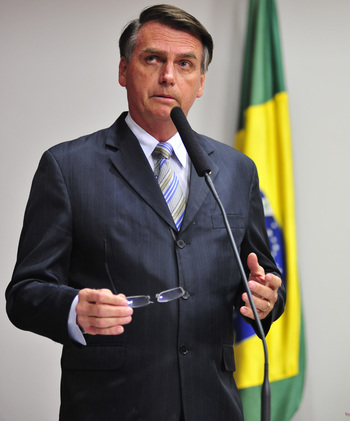 "Brazil above everything, God above everyone."
— His presidential campaign slogan

Jair Messias Bolsonaro (born 21 March 1955) is the 38th President of Brazil and a retired Brazilian Army military captain. Controversial is the mildest way anyone can describe him as his public figure has always been associated with it in one way or another. He became known when he publicly criticized the army for the low wages of its members, which got him into court-martial though he received a lot of support from his peers. He entered politics shortly afterwards and got into the spotlight once again in 1998 when he publicly praised the Brazilian Military Regime and Augusto Pinochet's rule over Chile, particularly regarding the Brazilian dictatorship as an "glorious period" in their country's history, and their greatest mistake was that "they didn't kill enough". Needless to say, he drew a lot of condemnation from the public and human rights activists due to the extremey authoritarian nature of these regimes, specially in light of being still fresh in people's memories at the time (the former ended in 1985 while the latter in 1998).

For many decades, Bolsonaro was considered an radical by others due to his outrageous statements condemning against interracial couples, women and LGBT rights, while favoring the military dictatorship, advocating torture, death penalty and nuclear weapon development, and many, many other horrors. It would be hard to imagine someone like him being even considered as president, but his appeal among the public grew following a very turbulent time in The New '10s that saw the Partido dos Trabalhadores (Workers' Party) party in control being involved in a never-ending series of corruption scandals and president Dilma Rouseff being impeached (though depending on who you ask, she was subjected to a coup) and replaced by her Vice-President Michel Temer.

In the following presidential election in 2018, Bolsonaro ran as an candidate, emulating a similar platform as Donald Trump by presenting himself as an "outsider" who would defy the establishment. Just like Trump, many were skeptical of his chances of actually winning in no small part due to the most likely candidate to win being PT's representative Luís Inácio Lula da Silva, who also served as President for two terms in 2002-2006 and 2006-2010 and ironically shares some similarities with Bolsonaro: Lula is a populist (albeit a left-leaning one) who is fairly divisive on his own and also ran as an outsider during his previous presidential campaigns against the established status quo of the time. The game was changed when Lula was barred from running due to (widely questioned) corruption charges and being replaced with his vice Fernando Haddad. Not helping matters was the attempt on his life he suffered while campaigning, where a guy stabbed him with a knife, requiring him to be hospitalized. Bolsonaro won against him the two election rounds as a result.

Bolsonaro built his campaign on socially conservative, economically liberal policies: he supports the idea of smaller government and free market, while promising to crack down hard on crime and preserving Christian values. His gun ownership advocacy is likely what won him most support among the public as Brazil is a country that suffers from extremely high criminality rates and he proposes the idea of arming citizens to fight against thugs, stating that drug dealers have access to automatic and high-caliber weapons while innocents have no means to defend themselves and argues that they should be able to "level the game". He has been very critical of "cultural marxism" and condemned the European Union as well as Communist regimes like Cuba and Venezuela for promoting it, and dismissed secularism as "nonsense", viewing Brazil as an Christian state where the minority has to adjust to the majority. note Brazil is a Catholic-majority secular state and Bolsonaro is a Roman Catholic, yet he enjoys a big support from Evangelical Protestants that hold a level of parliamentary power in the so called "Evangelical lobby" who are attributed to have secured Bolsonaro's victory.

As mentioned above, many people would consider him the Brazilian equivalent to Donald Trump, which Bolsonaro himself would definitely view as a compliment. His foreign policy is staunchly pro-American (specially towards the Trump administration) and pro-Israel (to the point he intends to close relations with the State of Palestine). Bolsonaro has also show suspicion towards China, which also happens to be Brazil's economical partner in the BRICS, and intends to move away from it's sphere of influence in order to formalize closer relationships with America.

Back in The '90s he actually used to defend Hugo Chávez (being that they're both military figures who entered politics and defended/launched coups, eventually leading both their countries) and a more statist economic policy, with the government having a key role in national development and owning key sectors of the economy (which was actually the policy of the Brazilian Military Regime after its more liberal, smaller-government early years), and actually voting in Congress against privatizations, but that's all in the past now.

Much like Rodrigo Duterte (with whom he also shares an similar history of controversial statements), he is an extremely hot topic not just in Brazil but abroad too - two of his most well-known detractors are Ellen Page and Stephen Fry, who view him someone who threatens the rights of minorities. His supporters point out that his policies run contrary to one who seeks to establish a fascist regime like promising to uphold free speech, arming the populace and having smaller government, while critics who at best, don't necessarily believe he will implement a dictatorship, believe that his policies will backfire in regards to environmental issues and granting access to weapons to anyone will further exacerbate violence than control it. Given how polarizing the man is, Rule of Cautious Editing Judgment applies.

Jair Bolsonaro has appeared in the following works: