Literature / The Eagle Down Under 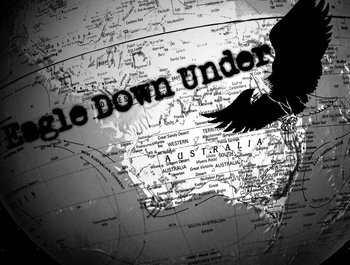 "We're all in for a world of craze."
Will the ANZC be able to survive into the 21st century and remain a world power? The question asked by many is still yet unanswered and we have to find out ourselves as time goes by bit by bit..

The Eagle Down Under (1983: Doomsday TL 2016-2030) (also mostly called EDU by the creator and fans) is a timeline of what happens in the future in the alternate history of 1983: Doomsday done in an accurate take. Created on AlternateHistory.com, by member LouisTheGreyFox. You can read it here

Even decades after the nuclear war between US/NATO vs USSR/Warsaw Pact in 1983, things have began improving to normal levels, however many changes have occurred as a result.

The timeline features many conflicts, issues, and great changes in society itself. For instance just like in OTL, same-sex marriage happens at the same time, New Zealand legalizes gay marriage in 2013, and in 2017 for Australia legalizes it as well. Technology itself is beginning to catch up to present-day standards albeit in mostly the Southern Hemisphere of the globe, and internet is becoming more and more common. However the main issue that the timeline heavily focuses on is terrorism.

The timeline itself starts out in 2016, showing the ANZC having to deal with a domestic terrorist organization known as the Australian Brotherhood, being comprised of mostly white supremacists who are outraged by the fact in recent years Australia is becoming home to many number of refugees from the former United States and China. Resulting in the organization creating many terrorist attacks against innocent people and the ANZC government itself. However interestingly enough they are crushed by a Self-Made Man who ends up working for the government of the ANZC. However even after the defeat of the Australian Brotherhood, a new foreign terrorist organization called the Hamas Caliphate declares war on the ANZC and SAC launching an attack similar to 9/11 (only worse) and destroying two Brazilian cities with nuclear weapons, resulting in another world war.

A world war on terrorism, which everyone calls it as the "World War on Terrorism". As a result we see perhaps the biggest war humanity has ever faced since World War II and if not perhaps even World War III. With this being said we see the rise of international cooperation between nations (both new and old) and the formation of military alliances solely done to help defeat terrorism.