Film / The Land of Faraway 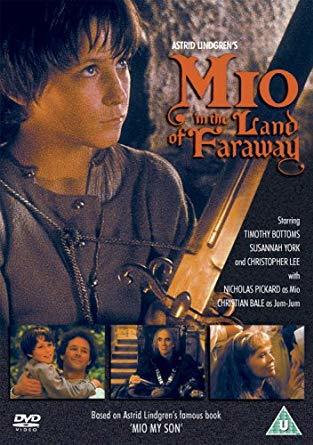 The Land of Faraway is an 80s family fantasy film directed by Vladimir Grammatikov, and starring Christopher Lee, Christian Bale, Nicholas Pickard, Timothy Bottoms, and Susanna York. It's based on the book, Mio, My Mio, by Astrid Lindgren.

The film begins in modern Stockholm. An orphaned boy named Bosse suffers neglect and abuse at the hands of his cruel aunt Edna and his apathetic Uncle Sixton, as well as being picked on by local bullies. For the record, his mother is confirmed dead and his father just disappeared. His best friend is Benke (Bale), son of a kind and loving father. The kind Bosse wishes he had, too. After an especially horrific night of abuse by his aunt and uncle, he runs away into the night to seek his real father.

On the way, he meets the kindly shopkeeper Mrs Lundin. She gives him an apple and asks him to mail a postcard. The postcard is addressed to the Land of Faraway, informing its King of Bosse's impending journey there. After Bosse mails the postcard, his apple turns golden (right as he about to bite into it, no less). Dropping the polymorphed apple in shock, Bosse spots something wriggling around in a discarded beer bottle. He pops it open and out comes the disembodied head that identifies itself as The Spirit from The Land of Faraway.

He reveals that he's traveled to Earth to retrieve the one bearing the sign of the golden apple. He instructs the boy to grab hold of his beard and then slowly floats out into space and through the galaxy until they reach The Land of Faraway. Oddly enough, Bosse survives this journey. Once there, Bosse is reunited with his real father, who turns out to be none other than the King (no, not that King), played by Bottoms. The King reveals that Bosse's real name is Mio and the boy begins an idyllic life on Green Meadow Island. He's treated with love and adoration by his father and subjects, and even gets cool horse out of the deal, Miramas.

Before long, Mio has befriended several local children, including the royal gardener's son Jum-Jum (also played by Bale). Others include the farm boy Jiri and his siblings, and the shepherd boy Nonno. Nonno teaches Mio and Jum-Jum.

However, not all is well. Something called The Whispering Well tells Mio that an iron-clawed knight named Kato (Lee) from the Land Outside has been kidnapping children and then forcing them to be his slaves by replacing their hearts with stones. Any children that refuse to serve him are transformed into birds and made to circle above the castle forever. Even his name induces terror when spoken. It also makes the wind pick up and the skies cloud over. He's just that evil. There's a prophecy about Kato as well. Only a young boy of royal blood, riding a white horse and bring with him a single companion can defeat him.

Mio picks up on the fact that he meets all the job qualifications and thus sets out on his epic journey with Jum-Jum and Miramas.

The Land of Faraway provides examples of: