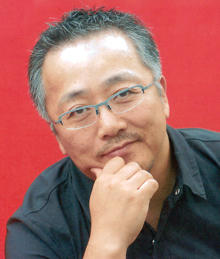 Mangaka-turned director Katsuhiro Otomo (born April 14, 1954) has been working in the field of manga since the 1970s. His first "short stories" were published in 1973, while he was still in college; three of his more famous short pieces were adapted into the film Memories in 1995. Between 1980 and 1982, he published Domu: A Child's Dream, which contained themes and imagery he would expand on in his six-volume magnum opus, AKIRA. Afterwards, he releases The Legend of Mother Sarah which he wrote but didn't draw (Takumi Nagayasu did), an eleven-volumes series that further elaborates on the themes of its predecessors but from a different perspective and concludes the cycle.

After taking charge of a film adaptation of AKIRA, Otomo made the jump from comic artist to film director; to date, he has six feature-length animations and two live-action movies (World Apartment Horror, 1991; and Mushishi, 2006) to his credit. In 2012, he announced his plan to return with a Shōnen manga set in Japan's Meiji period. This will be his first full-length series since The Legend of Mother Sarah, although it appears to be in Development Hell.

His dark, obsessively detailed Cyberpunk style has influenced dozens of artists, both in and outside of Japan. The film adaptation of AKIRA was a breakthrough success in the west and ushered forward an interest in anime in mainstream Western cinema, as well as a "second wave" of popularity among anime fans. His signature artstyle, as seen in Domu and AKIRA, is also notable for averting Mukokuseki, as characters are drawn with convincing ethnic features.

Clearly was involved with: