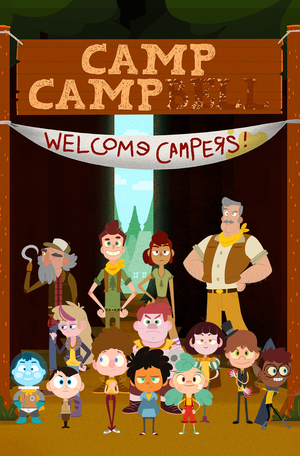 "There's a place I know that's tucked away, a place where you and I can stay!" note  Characters present, clockwise from the top left: The Quartermaster, David, Gwen, Cameron Campbell, Nerris, Harrison, Preston, Nurf, Nikki, Max, Neil, Ered, Dolph... oh, and Space Kid too.
Advertisement:

Camp Camp is an animated comedy from Rooster Teeth created by Miles Luna and Jordan Cweirz, about the exploits of a group of children and their counselors during their stay at the horribly run-down Camp Campbell.

For Max (Michael Jones), a cynical Jerkass who has a very jaded outlook on life, it seems far more like a prison than a summer camp, and the only thing that keeps him going is the idea of escape. He is quickly joined by two new kids, Neil (Yuri Lowenthal), who thought he was going to science camp, and Nikki (Elizabeth Maxwell), a self-described "agent of chaos". They are supervised by David (Luna), the overly cheery head counselor who seems oblivious to the fact that the camp is a total craphole, and his far more cynical assistant Gwen.

The first season premiered in June 2016, with each following season premiering every June since. There have also been a number of Halloween and Christmas episodes that have aired between seasons. After season four, it was announced that due to company restructuring, the show would be put on indefinite hiatus until an outside studio could be found to assist with production of future episodes.

Prepare for the Killer Party

Example of:
Drinking the Kool-Aid

Prepare for the Killer Party