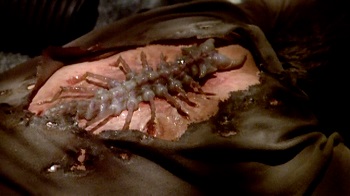 Marcus: All we need is one of them to leave the room. Then there will be only one man with the gun.
Franklin: Excuse me, where I come from, one man from three leaves two.
Marcus: Where I come from is a far more interesting place.

An pair of humans have come to the station to infect lurkers with insectiod creatures, but one of them dies in the process, while Sheridan and Ivanova discuss whether or not to include the newly-promoted Lt. Corwin in their plans. The captain asks her to meet with Corwin and feel him out.

Meanwhile, Marcus finds a friend of his, Duncan, in the Bazaar. Duncan is sick, but refuses to see a doctor, despite Marcus' urging.

In Medlab, Franklin autopsies the body from earlier, finding evidence of a parasitic infection.

Marcus tries to determine why some of his contacts no longer wish to work with him, but gets no answers, as the pair from before put another of the creatures into Duncan. Franklin discovers that the parasite is able to exist in any lifeform, and begins trying to find out where they came from.

Ivanova invites Corwin to her quarters and, while somewhat apprehensive, he accepts. Unsure of what exactly he's in for, he tries to buy some flowers. She's flattered, but he's too embarrassed to admit he brought them himself. They talk for a while, and Ivanova asks him how he feels about bending the rules, or doing what's right even if he's ordered not to. Corwin believes the chain of command must be followed and would report anyone who is working against their superiors. Ivanova thanks him and lets him go.

Marcus finds Duncan has gone missing but is unable to get any help from Garibaldi, but does eventually manage to convince Franklin to help him. They manage to get themselves captured by the hosts of the creatures. Duncan comes and talks to them, explaining that he's one of the Vindrizi, that they don't mean any harm, but Marcus and Franklin are both skeptical. When they have a moment to themselves Marcus asks why Ivanova's so cold with him, much to Franklin's annoyance and confusion. Then the Vindrizi take Franklin to treat one of their hosts, and Marcus takes the opportunity to escape. He tries to call for help but he's trying on Franklin's comlink, which won't allow an unauthorized user. It does notify security, however.

Marcus charges in to where the Vindrizi have Franklin, threatening them unless they let them go, but Duncan tries to convince him not to. He explains that the Vindrizi hold memories from over a hundred thousands years, and that they take hosts from those who are dying to give them a new lease on life. Marcus isn't convinced and the creature inside Duncan exits him. Duncan laments losing it, and forgetting the memories it held, but Franklin is now convinced but wants approval over future hosts and their consent as well.

Duncan leaves the station to see some of the things the Vindrizi showed him, while Franklin finds they were being truthful about their plans. He also mentions that Marcus was asking about Ivanova and thinks she should give him another chance. She figures that must be it, and runs off. She finds Marcus and shoves the flowers at him, yelling, "Keep them!" Marcus is quite surprised and begins to think there's hope for them after all.