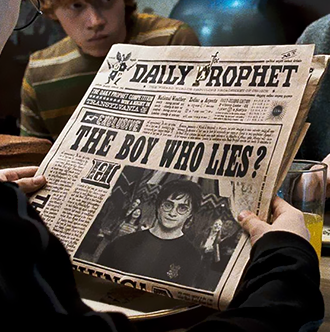 Scandal!
Now you've left me, the world's gonna know
Scandal!
They're gonna turn our lives into a freak show
They'll see the heartache, they'll see the love break
They'll hear me pleading, we'll say "for God's sakes"
Over and over and over again
— Queen, "Scandal"
Advertisement:

When you're a celebrity, or become one overnight, tabloid stories will turn your personal life into a trashy melodrama. Try not to take it too seriously, even if they are pronouncing nuptials for you and some celebrity you merely had a friendly conversation with.

Truth in Television (but not in tabloids), especially applied to Hollywood actresses and actors. For characters who work for such publications, see Paparazzi. Also see Lurid Tales of Doom.