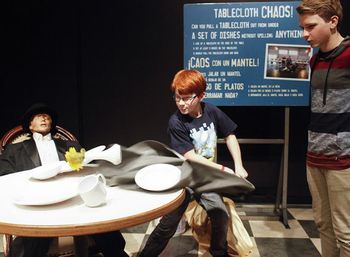 The flowers aren't even standing!
Advertisement:

A white tablecloth. A beautiful placesetting (bonus points for a lot of fine crystal or a vase of fresh flowers). Our Hero takes one corner of the cloth and with a single pull whips the tablecloth off the table, leaving the placesetting undisturbed.

This trick is a good, showy way to demonstrate that a character is a stage magician or is otherwise unusually dexterous. (It also demonstrates that the character knows physics — the dishes and glasses are held in place by inertia.)

And even when this trick fails — sending flowers, silver, and glass everywhere — it's still entertaining.