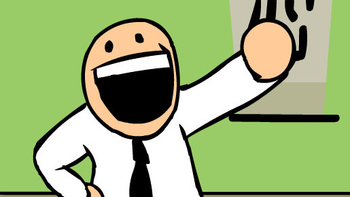 Our hero, ladies and gents.
Advertisement:

He's one crazy fellow, isn't he?

The Dad Series is created by Sakupen on Newgrounds. It details the wild mis-adventures of the delightfully demented eponymous character, Dad, who just loves to destroy things. Constantly. Plus his head just randomly catches on fire and...

Yeah, you can already tell that this series is gonna be weird, can't you?

In Dad's Home, the eponymous character busts down the door of his house, douses his head with the family cat, and smashes his television into the refrigerator. He proceeds to smash a toaster with his fist, then brings a lasso out of nowhere and uses it to grab a huge keg of beer from a passing truck. He punches a hole in it and gives the beer to his kids, before running off again to break more things. Deciding that isn't enough, he punts the beer keg out the window and straight into his neighbor's house. Then he pulls a sword out of his mouth, smashing a fly, cutting a cup in half, and flings it out the same window, and straight into the neighbor's mailbox.

The Frat Boys (the truck drivers with the beer) and the neighbor all head over to the house to give Dad what for. Dad is writing some impossibly long equation on the wall until they ring the door bell. He snaps his fingers and teleports to the front door, head ablaze again. After dousing his head with the cat once more, he fires laser beams at the three. This startles a granny (averting Unusually Uninteresting Sight), and she calls the cops.

What does Dad do to stop the cops? He rocks out to the theme of Mute City.

Crazy, huh? Well, in Dad's At Work, he tears out a computer cord, runs to his office, using the elevator by jumping into the shaft, slicing its support cable, and busting out the top floor's doors. Then he uses his computer blazingly fast, and ninja kicks it for no reason at all (complete with the computer reading 'UH-OH'), then uses his tongue to get coffee, and breaks down his boss' wall, his head ablaze once again.

Then DadGame (also known as Dad's in Overtime) comes along. After destroying his workplace, he destroys his boss' office, only to find his evil plans. Now he has to fight against his own boss and save the town from his nibby little hands.

It's a weird series, but it's fun as hell to watch and play. You can watch it and play DadGame here.

This really wacky series has the following examples... (Post whatever examples you like, most of the tropes here right now will focus on DadGame.)