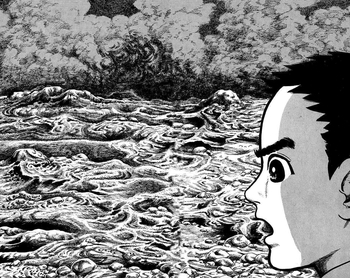 A very dark manga (original title: Hyoryu Kyoshitsu) by Kazuo Umezu. It was first serialized in Shonen Sunday from 1972 to 1974 and later made into two different live-action movies: A Japanese one

Sho Takamatsu's day started out bad. He overslept, found his mother had thrown out all his toys, didn't eat breakfast, and left home after getting in a screaming argument with his mom. After arriving at school, class began, only to be interrupted by an earthquake. Things appear to be settling down, until he discovers the school has been mysteriously teleported into a post-apocalyptic desert wasteland.

Things quickly go even worse, as the psychotic delivery man Sekiya takes the food hostage and begins killing people, and the students and staff are forced to fight for their lives. It doesn't help when they find evidence that they've been teleported into the future and that the rest of the world has been completely turned to desert. Or that there does not seem to be any food other than what was teleported with them, and that everything in the world seems calculated to kill them.

Meanwhile, back in the present, Mrs. Takamatsu pines for her son. When she starts receiving psychic messages from him, can she give him enough help to survive in his barren environment?