Manga / Dropkick on My Devil 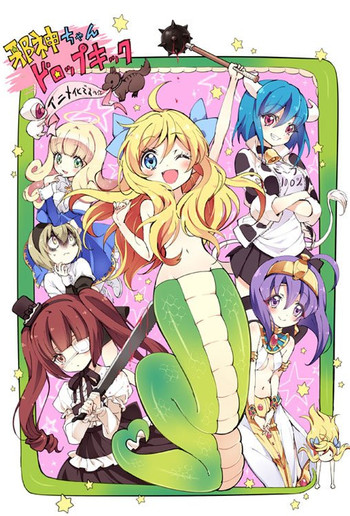 Dropkick on My Devil (Jashin-chan Doroppukikku) is a comedy manga written and illustrated by Yukiwo, which began serialization in Comic Meteor in 2012.
Advertisement:

The manga follows a college student named Yurine who ends up summoning a lamia devil named Jashin-chan while dabbling in dark arts. Jashin takes offense that a lowly human would dare summon her and tries to kill her. Keyword: "Tries", as Yurine turns out to be extremely formidable and quite proficient in weaponry. And since she summoned Jashin, Jashin can't go back home until Yurine either sends her back (which she doesn't know how to do) or is killed. So begins a rather odd relationship of sorts with Jashin trying every opportunity to off Yurine while some other devils soon get into the mix as well.

Has a character page, please contribute.