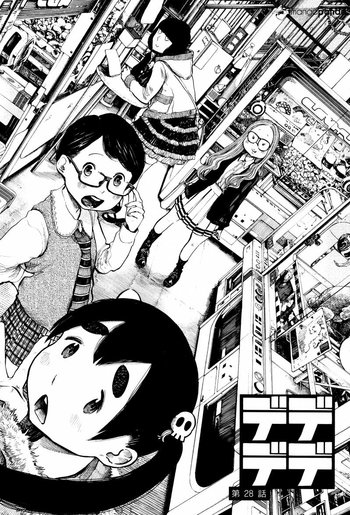 Clockwise from bottom: Ontan, Kadode, Rin and Ai.
Not pictured: Kiho.
"No matter what happens, I won't back down. At least not until this world filled with lies and deceit crumbles away. (...) The real threat to humankind is not invaders, but me."
—Ouran "Ontan" Nakagawa
Advertisement:

Three years ago, a gigantic alien spaceship suddenly filled the skies of Tokyo. Although it has yet to attack, all efforts by the Japanese government to bring it down have only led to widespread collateral damage and the subsequent collapse of Japan's economy. The JSDF fights a brutal war against the "Invaders" while Japanese weapons manufacturers and overseas private military corporations make millions, and America has become increasingly aggressive in their own relations with an increasingly warlike Japan. Angry protestors take sides, with some wanting the Invaders completely obliterated without mercy and others wanting to make peace and end the senseless conflict. All the while, the mothership floats above Tokyo like the inescapable sense of dread gripping the world.

But this is the story of highschoolers.

Dead Dead Demon's Dededede Destruction is a strange Seinen Slice of Life manga by Inio Asano (author of Goodnight Punpun), which was serialized in Big Comic Spirits from April 28, 2014 to February 28, 2022 running at exactly 100 chapters. The story follows the lives of five high school girls (later college students), focusing mainly on the geeky Kadode Koyama and the eccentric misanthrope Ouran "Ontan" Nakagawa, as they live in a world under the shadow (figurative and literal) of an alien invasion. Combining some at-times dark comedy and social commentary on the Internet's effect on today's youth, this series is notably lighter than some of Asano's earlier works, but still manages to instill a sense of looming disaster that hangs over the head of the cast like the alien spaceships that have become a part of everyday life.