Manga / The Daughter of Twenty Faces 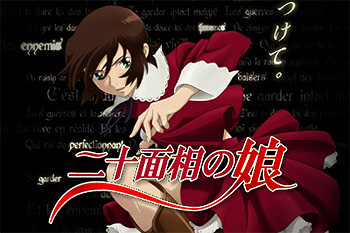 "He has many different faces... and I'm one of them! "
Advertisement:

The Daughter of Twenty Faces (Nijū Mensō no Musume), an action/mystery manga in the vein of Lupin III and Cowboy Bebop, was made by Shinji Ohara and was serialized from 2003 to 2007 in Comic Flapper magazine. An anime adaptation aired in Japan from April 12 to September 27 in 2008, produced by Studio Bones and TMS Entertainment's Telecom Animation Film and promoted internationally as Chiko, Heiress of the Phantom Thief (though to this day, it still hasn't been formally picked up for English release).

The focus of the story is Chizuko "Chiko" Mikamo, a young girl who desires to get away from her home because her uncle and aunt have been slowly poisoning her and leaps at the chance when international Gentleman Thief "Twenty Faces" comes to "steal" her. Abandoning her old life, she learns the way of proper cat burglary from Twenty and his merry band of men, and eventually must come to terms with Twenty's legacy and her position as The Daughter Of Twenty Faces. This manga is a derivative of classic detective fiction. Twenty Faces first appeared in the late 1920's as the Worthy Opponent of Endogawa Rampo's detective Akechi Kogorō, who is also featured later on.

Not related to the CLAMP manga, Man of Many Faces (the title character is called "The Man of 20 Faces").