Manga / Dawn of the Arcana 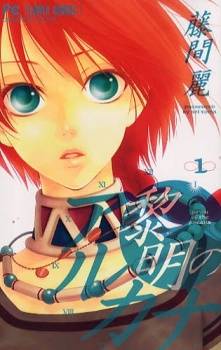 "Today, I have become the enemy's possession."'
—Princess Nakaba
Advertisement:

To maintain peace between two neighboring countries of a small island—the northern country of Senan and the southern country of Belquat—who have suffered through 200 years of waging war and strife, a political marriage is arranged between Senan's Princess Nakaba and Belquat's second-in-line Prince Caesar. Nakaba attempts to hold a strong front and remain strong among the public eyes as she is discriminated by the people of Belquat for her poor Senan background and her inferior red hair. The only solace that she finds in her new and unfamiliar environment is her attendant and longtime friend Loki, an Ajin (or a sub-person) (called demi-humans in Viz's translation)—a half-beast and half-human with beast ears and a tail. However, when Nakaba begins receiving premonitions involving Caesar's impending death, will she use this information to save him, or will she let her husband die and exact her vengeance against Belquat and the people who despise her?

But as Nakaba gradually develops feelings for Caesar, a war between humans and sub-people is beginning to take its first steps and Nakaba soon learns that her visions are more than mere premonitions and stem from her mysterious and rare power—"The Arcana of Time"—a power that can bring miracles at a cost and is both sought after to be harnessed for ulterior motives or to be ultimately destroyed for its strange ability. Nakaba struggles to find a way to use her power of "The Arcana of Time" to save people's lives and prevent bloodshed as Caesar, Loki, and she try to create a new world free from corrupt royal families and discrimination against appearances, bloodlines, and races.