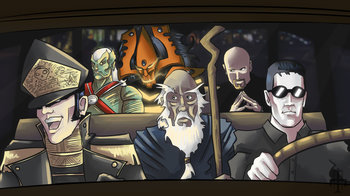 Meet - Ciaphas Cain,* HERO OF THE IMPERIUM! Kain, Khaine, Deckard Cain, this Kane, aaand Caine. Not pictured: Kane.
"C-a-i-n, like in The Bible, but I didn't kill anybody."
— Herman Cain's typical self-introduction

Ever since that guy in The Bible killed his brother, characters named Cain, Caine, Kane, Kayne, or variants, have had a bad reputation. They tend to be villains. Since Evil Is Cool, though, it was only a matter of time before the name became acceptable fodder for the odd antihero, as well. Either way, they tend to be morally sketchy, and probably badass.

A specific form of Names to Run Away from Really Fast, and, of course, a Meaningful Name. Also see Cain and Cain and Abel, for obvious reasons. Compare One Mario Limit.