Daily Lives of High School Boys was lazily brought to you by these sponsors.
Don't say lazy! 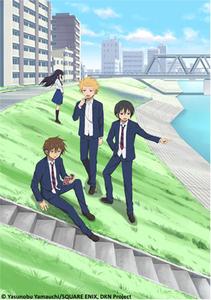 It's... Exactly What It Says on the Tin.

The anime adaptation, produced by Sunrise, premiered in January 2012 and has been licensed

In September 2012 the author abruptly ended the manga. There was no announcement prior to the last chapter nor did that chapter offer any kind of wrap-up to the story. The reason for the cancellation remains unknown. The artist has since begun working on Zai x 10, indicating that an un-cancelling is unlikely.

Long after its ending, the manga was licensed for English-language release by Kodansha Comics under the Vertical imprint in North America and released in August 4, 2020.

Not to be confused with that other Nichijou that's very popular on certain image boards. Compare to Wasteful Days of High School Girls (Joshikousei no Mudadzukai), a manga by Bino, which has a similar tone and premise but with girls.

Daily Lives of High School Boys is brought to you by these tropes: