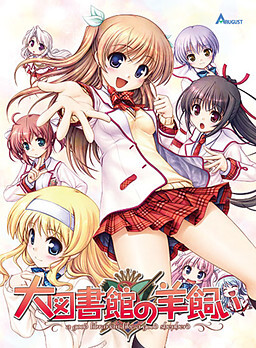 The heroines of Shiomi Academy. note (Clockwise from center: Shirasaki Tsugumi, Misono Senri, Sakuraba Tamamo, Suzuki Kana, Kodachi Nagi, Mochizuki Maho
"Be nice to the people you meet. Wish for their happiness from the bottom of your heart."
Advertisement:

The Shepherd, an urban legend of Shiomi Academy, is said to appear before hardworking students to grant them a wish.

While engrossed in a book inside the school's renowned Great Library, Kyoutarou Kakei, a second year student and the Library Club's de facto president, receives an email from the Shepherd foretelling an event that will change his fate. Worried by the message, Kyoutarou rushes over to a nearby train station and encounters fellow student Tsugumi Shirasaki, whom he saves from being hit by a derailing train. Grateful for his heroic actions, Tsugumi joins the Library Club and invites Kyoutarou to participate in her mysterious "Shiomi Happy Project." Together with other new members of the club, they strive to make the academy a better place and uncover the identity of the enigmatic Shepherd.

Daitoshokan no Hitsujikai and its related material contains examples of: