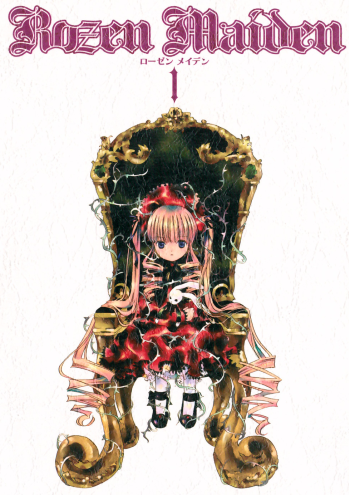 "You must swear by the Rose Ring... that you will protect my Rosa Mystica."
"The Alice Game is about to begin."
— Hinaichigo, towards Shinku
Advertisement:

Jun Sakurada is a boy with a trauma in his past and a strange hobby: He collects supposedly cursed items in the hope that one of them will actually turn out to be cursed. One day, he receives a letter which simply says, "Will you wind? Yes / No". Responding in the affirmative, he sticks the letter in his desk drawer and thinks nothing more of it until an ornate case arrives with a beautiful clockwork doll inside. True to his word, Jun does wind, which causes the doll to become animated.

Shinku, the doll, immediately sets about correcting Jun's mannerisms, trying to convert him into her servant by default — an attempt cut short by the appearance of a stuffed clown with a pair of menacing-looking knives. Jun, fearing for his life, agrees to become Shinku's master (her supply of power so that she can fight), and is drawn from there into the strange world of the Rozen Maiden dolls and the Alice Game.

One of Peach-Pit's most famous manga, the series has seen several publications. The manga originally ran in Monthly Comic Blitz from 2002 to 2007, but a second manga series was published in Weekly Young Jump in 2008 under the name Rozen Maiden note written in katakana this time instead of using the Latin alphabet. It begins as a For Want of a Nail story starring a much older Jun Sakurada, which follows what would have happened if Jun had responded "do not wind" to the initial letter, and crosses over with the original universe. After a few volumes, the older Jun's story finishes, and the two universes separate again, with the story shifting back to the original universe, and the plot resuming where the original manga ended, making the 2008 manga, despite what it initially looked like, an actual continuation instead of an Alternate Universe spin-off. This time period also introduced several manga that ran through 2012-14, Rozen Maiden: Dolls Talk, in Ribon and Maite wa Ikenai Rozen Maiden in Miracle Jump. A collector's edition of the manga was announced in April of 2022 that collects the original and continuation manga, finally bringing the two serializations together under the same name of Rozen Maidennote rendered in katakana like the continuation manga and subsequent Rozen Maiden media since.

A more faithful anime adaption started airing in the Summer 2013 Anime season, adapting the first arc of the 2008 manga, with Studio DEEN providing the animation instead of Studio NOMAD. This anime was subtitled Zurückspulen for overseas release note in the original Japanese market the anime is usually referred to as Rozen Maiden (2013) as the original anime is also just Rozen Maiden.

In December 2015, it was announced that a new manga series would start being published in Ultra Jump starting early 2016, named Rozen Maiden 0. This manga takes place in the Taisho era of Imperial Japan and covers the mystery of the Zeroth Doll. It concluded in March 2019 with a total of 4 volumes.

This page covers the original manga, the 2008 Stealth Sequel, and other related works in the same canon, including Studio DEEN's anime. For tropes on Studio NOMAD's anime see Anime.Rozen Maiden.