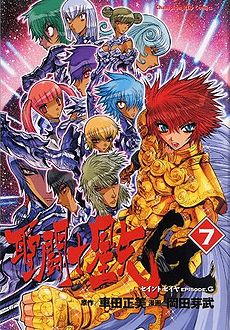 Saint Seiya Episode G (聖闘士星矢EPISODE・G Seinto Seiya Episōdo Jī?) is an ongoing Shōnen manga written and illustrated by Megumu Okada. A side-story and a derivative work of the manga Saint Seiya, which was authored by Masami Kurumada.

The story is set 7 years before the events of the original Saint Seiya manga and 6 years after the death of the Sagittarius Gold Saint Aioros and depicts the battle of the Gold Saints to protect the Earth from the threat of the awakened Titan gods.

After a 2 year break, the series is being resumed. Has now a spin-off, Saint Seiya Episode GA, starring Shura and Aiolia in the future.

This series provies examples of: