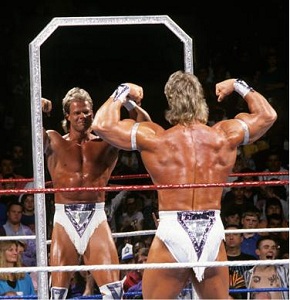 The Fighting Narcissist is arrogance and pride incarnate. He is the most beautiful, the most perfect, your superior in every way. And should you doubt this fact, he will make you pay for your folly, severely.

The Fighting Narcissist is a common character type in action series, especially common in martial arts media. He is a formidable fighter who happens to be handsome, extremely so, and takes pride in that fact to the point of capital sin. To him (and it's almost always him, not her) there is no one more beautiful or talented than himself, and to him both concepts are synonymous. He doesn't just happen to be both beautiful and talented, he's beautiful because he's talented, and vice versa.

He is selfish, vain, and confident of himself and condescending to anyone and everyone else. Physically, he tends to be slim, tall, and fair, but with defined musculature. He will have Caucasian features, even if he's not actually Caucasian. He will be refined in speech and manners, with a tinge of condescension in his speech. He is usually quite seductive, perhaps even refined and charming, but he is nowhere near as pleasing as he might seem at first glance. Beauty is an obsession to him, and often he describes his actions in these terms ("My fighting style is the most beautiful", or "Seeing blood run is a thing of beauty", for example).

This is manifested in exotic weapons, fashionable clothing, body modification, even the use of makeup or masks. You can tell a character is a Fighting Narcissist at first glance: his appearance is genuinely striking. He also tends to be quite wealthy, and a member of the upper crust of society.

This attitude does not lend itself to altruism: Fighting Narcissists are almost universally bad. They have no friends, few allies, and innumerable enemies. They see no one as their equal, and any alliance will be one of convenience. They might sometimes be a villain's Dragon, but have no loyalty to their master beyond convenience, and might even try to take the top seat themselves.

As much arrogance as he might display, he is a talented fighter, dangerously so. Fighting styles lean towards the acrobatic and eccentric (they are mostly very fast). Another particular characteristic, curiously, is Combat Pragmatism. While all opponents are beneath him, no method of achieving victory is. He will use hidden weapons, underlings, and all other sorts of nasty surprises. Victory is all that matters to him, and he sees using underhanded tactics as him being smarter and more cunning. Honor means nothing to him, since honor is, to a certain point, an altruistic attitude, and he always looks out for number one.

Another particular characteristic of a Fighting Narcissist is his attitude towards sexuality. By his definition, any other person is inferior to him, so he is often not actively sexually interested in anyone else. While often effeminate, he is rarely actively interested in men, although he might become obsessed with another fighter who's actually beautiful and talented as well. On the other side of the spectrum, his attitude towards women is almost universally, irredeemably bad. A Fighting Narcissist tends to abuse women and finds much amusement in it. If he actually considers a woman attractive, it is to the point of obsession, and this relationship can lead to massive amounts of Belligerent Sexual Tension. Conversely, if the Fighting Narcissist is effectively gay, he'll almost universally be an Effeminate Misogynistic Guy. The bottom line is that a Fighting Narcissist generally does not deign anyone to be worthy of his desire, and any desire he might have for someone is ALWAYS unhealthy.

If a hero actually proves himself superior in anything, the Fighting Narcissist does not take it well. His high opinion of himself does not allow him to take defeat in any way lightly, and any humiliation he is subjected to instills irrational hatred in him. Oh, and scarring him in ANY way, especially in the face, will enrage him to the point of murderous insanity. If he doesn't get killed (or kill himself), expect him to act the part of Beauty to Beast, wear a mask, and Black Cloak, and break every mirror he sees.

While he can be ambitious and seek power, the main reason a Fighting Narcissist actually fights is self-gratification. He does not fight to prove himself, because he has nothing to prove: in his mind, he's already perfect. He does not seek a challenge, because such petty behavior is beneath him. More often than not, he fights out of boredom and bloodlust: he enjoys fighting and enjoys causing pain, period. Although rarely needing to work, he will often be a gangster, contract killer, or bodyguard; basically, professions that expose him to violence. He might also be a Serial Killer who uses fighting as an excuse to commit murder.

The character can also be used in a less extreme (i.e. non-murderous but still violent) fashion in lighter media: pro wrestling, for example, has myriad examples of arrogant and vain fighters. Also, very rarely, a Fighting Narcissist might actually be convinced to leave the dark side, but this is exceedingly rare, and many times it ends in his ultimate demise.

Related to Beauty Is Bad and Agent Peacock. Contrast Arrogant Kung-Fu Guy, who, while also condescending of others and a powerful fighter, is not obsessed with his looks nor inherently evil, and Gorgeous George, whose obsessions lead to ambiguity more than arrogance and is friendly with the females to heighten the ambiguity. Spiritual brother to the Smug Super and the Combat Aestheticist. Often a successful blow to the face will be a Berserk Button. The Fighting Narcissist also parallels the Combat Sadomasochist in terms of the Seven Deadly Sins: where the Narcissist has Vanity/Pride as a staple, the Sadomasochist is into Lust. In Manga, this type of character is referred to as the narusisuto, a long-haired, effeminate self-admirer.

He even flexes while attacking.

He even flexes while attacking.