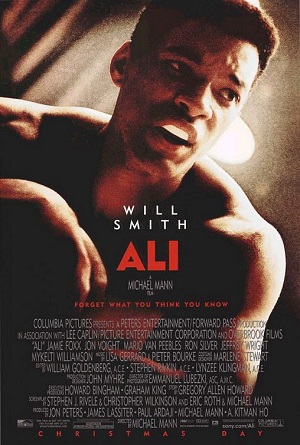 Ali is a 2001 Biopic about the life of Muhammad Ali.

It chronicles Ali's life from the first Sonny Liston fight in 1964, through his opposition to the Vietnam War which resulted in a long legal fight with the U.S. government, through his 1974 "Rumble in the Jungle" showdown fight with George Foreman. It was directed by Michael Mann and stars Will Smith as Ali.

For more about the "Rumble in the Jungle", see 1996 documentary When We Were Kings.