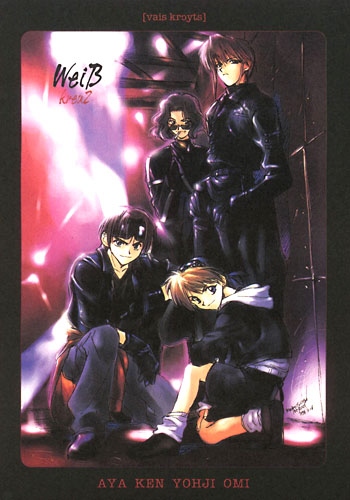 Weiß Kreuz is the brain child of veteran voice actor Takehito Koyasu (Angel Sanctuary, Fushigi Yuugi, Tokyo Babylon, etc.), which was originally conceived as a star vehicle to allow himself and several other high-profile voice actors to show off their acting and singing talents. He sent his idea to a group of producers, who at first were wary of signing on for an obvious vanity project unless there was something of "substance" to get audiences to watch. Thus, they hired some writers to use Koyasu's ideas to create a series with Multiple Demographic Appeal, which included hiring a character designer to create some rather sexually dubious promotional illustrations (in other words, action and intrigue for the boys, and plenty of Bishōnen eye candy for the girls).

The series itself is about a quartet of incredibly handsome professional assassins with very dark and angsty pasts, who fronted themselves as the clerks of a flower store. They were involved in an Ancient Conspiracy between the corrupt factions of a very rich family, and had to fight against a group of psychic-powered assassins even more unhinged than them.

To the surprise of just about everyone but Koyasu, Weiß Kreuz was a success. Everybody won: he was able to demonstrate his dramatic capacity and win some credibility, the female public across the world drooled, and the executives made an obscene amount of money.

Weiß Kreuz is a multimedia franchise, ranging from radio drama (as it was initially conceived by a bunch of seiyuu), to anime series, OVAs, light novels and manga. The seiyuu themselves formed a music band under the same name and released several singles, albums and concert tours. These releases may also be in anachronic order due to a couple of prequels, and certain releases centered around some characters' pasts (such as the Schwarz drama CDs).

A rough chronological (not release) order of the series, radio dramas, manga, etc. are as follows: 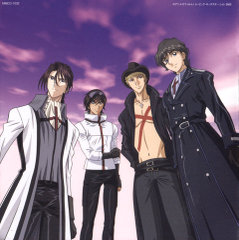 Unfortunately, after the original TV series ended (and accompanying artbooks and OVAs were released), Kyoko Tsuchiya quit the project and denied the producers the right to continue using her designs. As the story was still unfinished and there was more money yet to be made, they were forced to continue with a new artist, who had to radically alter the character designs to avoid a lawsuit. The Oddly Named Sequel, Weiß Kreuz: Glühen, didn't do as well financially, and the new designs turned away many fans.

After Glühen, the series continued with a new manga and artist. Weiß Side B lasted about thirty chapters before being Cut Short. It remains to be seen if Takehito Koyasu's project Velvet Under World, which features a lead character named AYA and several apparent other nods to Weiß Kreuz continuity, will be set in the same universe or if it will even make it off the ground.