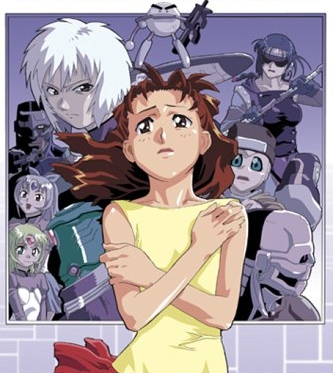 Originally serialized in Dengeki Daioh from 1997 to 1999, Kurogane Communication is a manga written by Hideo Kato and illustrated by Tomomasa Takuma. It was adapted into a 24-episode anime that aired on WOWOW from 1998 to 1999. Both the anime and manga have seen an English release, though it took over ten years for the latter to get picked up.

Thirteen-year-old Haruka is the last survivor of a war that destroyed human civilization thirty years ago. Well, the last human survivor, that is. After waking up from coldsleep, she was adopted by a "family" of robot survivors: domestic robot Spike, pint-sized gun nut Trigger, combat gynoid Angela, floating supercomputer Cleric, and scary-looking but fatherly Reeves. Haruka's robot family scavenge food, water and batteries from the ruins while defending their charge from the ever-present combat machines left over from the war.

You'd think all this would get to a little girl after awhile, but after a year in her new life Haruka is remarkably cheerful. Still, she sometimes wishes she had a human friend around to keep her company...

Well, she's about to get her wish. But it'll come with problems of its own.