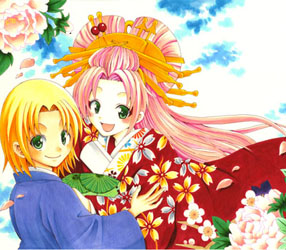 Izumo, in both his normal form (left) and kabuki persona (right).
Advertisement:

Izumo Kunisaki is a normal fifteen-year-old high school student who just happens to be an innately-talented onnagata (male actor who plays female parts in kabuki), much to his dismay. When he was seven years old, his mother divorced his perverted father and moved away with him to prevent his father from exploiting his girlish charm. Fast forward to the present. Within the first chapter, his mom leaves on a world tour and he is forced back to his father's kabuki troupe and his old career as an onnagata. Hilarity Ensues.

Initially a one-shot featuring Izumo fighting crime by transforming into an incarnation of Izumo no Okuni, the founder of kabuki, this comedy manga by Aya Hirakawa was later reworked and serialized in Weekly Shonen Sunday from 2010 to 2014, without the supernatural and crime-fighting elements, although it still revolves around the world of kabuki, a traditional Japanese theatrical genre that is rarely depicted in great detail in manga. It thus serves as a useful beginner's guide to kabuki while still providing a good laugh.