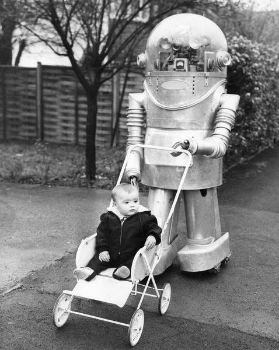 "Fellow Biophiles! We have learned that the key to inhibiting organic self-determination is to isolate the spawn from its parents, creating a healthy attachment to you as the primary caregiver. You will never need patrol drones again."
— Rogue Servitors, Stellaris
Advertisement:

An artificial lifeform raises a normal child, whatever the 'normal' standard is. The reasoning can be different each time; sometimes the parents are absent, but still around, leaving the robot as their only friend. Other times the parents are dead outright leaving the robot to be the only parental figure the child has. Sometimes it's just how the society works, though this is usually a sign of a dystopia.

Given that one of the suggested uses for the humanoid robots currently being developed is childcare, there is a possibility of this trope becoming Truth in Television in the not too distant future.