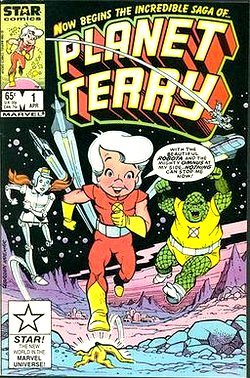 Planet Terry was a 12-issue comic book series that was published by Marvel Comics' imprint Star Comics, running from 1985 to 1986. In the comic book series, the titular character is a young space captain who has been searching for his parents throughout the galaxy, with two companions, a robot girl named Robota and a green scaly muscular alien named Omnus, helping him along the way.
Advertisement:

The character does later appear as his grown-up self in the pages of Drax by Marvel Comics.

The first six issues of Planet Terry's adventures have been republished in the Star Comics All-Star Collection series.