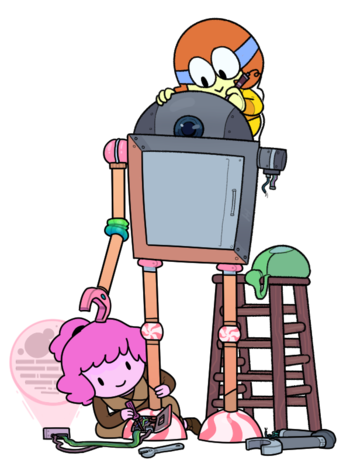 So your resident smart guy is already bespectacled, a master chess player, and fluent in Latin. How else can you show how brilliant he is? Why, by having him build robots of course! May be justified (said smart guy has a formal education in an appropriate branch of engineering, is a self-taught Gadgeteer Genius, etc.) or not (said smart guy is a teenager who just happens to, among his many other skills, be able to create from scratch a fully functional robot). A lonely or isolated creator might create a robot for the sake of having a friend or a lover.

This may be because all nerds are good with technology, so building robots is the next logical step. In Sci-Fi stories, expect the creation to be an Artificially Intelligent anthropomorphic Robot Buddy. Or Evil.

The smart guy could use his robot to battle the robots of other smart guys, destroy giant monsters, or do his chores.

Compare and Contrast the Robot Master, who does this sort of thing for a living, rather than just as a hobby between many other non-robot related science projects.

Here's Rick building and programming a robot to pass the butter plate. That's it, nothing else. (Contains two clips)

Here's Rick building and programming a robot to pass the butter plate. That's it, nothing else. (Contains two clips)