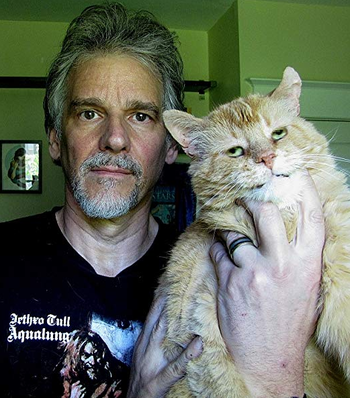 "Whenever I find my will to live becoming too strong, I read Peter Watts."
— James Nicoll
Advertisement:

Watts' first novel Starfish (beginning the Rifters Trilogy) focuses on a group of people who've been surgically augmented to survive the crushing depth of the ocean floor, in order to work on a power station located on a geo-thermal vent. The catch is that most normal people have trouble adjusting to the stresses of working and living in such an environment, so people who are naturally adapted to living in stressful environments are recruited instead. In this case, victims of abuse, including pedophiles, borderline masochists and clinical sociopaths. It gets worse. The series juggles dark character study, a distinctly un-rosey view of future society, kick-ass action, and cutting edge technology. The series earned Watts much critical praise.

His next novel, Blindsight (unrelated to Rifters), focuses on a Ragtag Bunch of Misfits sent to investigate a strange alien artifact that's been detected on the edge of the solar system. The novel is mainly a First Contact story that mixes elements of cosmic and psychological horror in order to examine (and deconstruct) the ideas of sentience and consciousness. Blindsight became something of a hit for Watts, garnering a Hugo nomination for best novel. The companion novel Echopraxia was published in August 2014 and is set in the inner Solar System.

Most recently, he consulted on the tech and plot

of the videogame Crysis 2, as well as writing the novelizationnote he did not write the actual game story; that was done by fellow sci-fi author Richard K. Morgan.

Watts likes to show his work, utilising extensive notes and references to support his work and theories. Because of this, unsurprisingly his work tends to end up as hard science fiction. It also usually lies at the cynical end of the spectrum too, although not often without the slimmest, most stoic, hope available, if you squint.