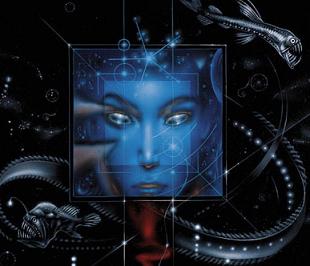 "Take a dozen children, any children. Beat and mix thoroughly until some lumps remain. Simmer for two to three decades; bring to a slow, rolling boil. Skim off the full-blown psychotics, the schizoaffectives, the multiple personalities, and discard. Let cool. Serve with dopamine garnish. What do you get? Something bent, not broken. Something that fits into cracks too twisted for the rest of us."
—Excerpt from personal diary of Yves Scanlon, N'AmPac GA Industrial Psych
Advertisement:

A Speculative Fiction series by sci-fi author Peter Watts. Taking place 20 Minutes into the Future, the series is set in a Crapsack World where the end is nigh.

The N'Am-Pac Grid Authority is building geothemeral power plants at the bottom of the ocean, along tectonic rifts. But constructing and staffing these stations is a problem, since people are hard to keep alive and functional at such depths. As such, the company has developed certain cybernetic enhancements for its workers, resulting in the titular "Rifters". With one of their lungs replaced with complex machinery, a Rifter can breathe underwater indefinitely as well as function in the crushing depths of the deep sea. Combined with a self-cleaning skinsuit, a voice-modulator for speaking underwater, and light-amplifying "eyecaps", a Rifter can feel more at home in the deep than anywhere else.

The thing is: normal people tend to suffer complete nervous breakdowns when they're miles underwater, literally under extreme pressure where they might die at any moment from the many dangers of the rift. So in a somewhat questionable bit of decision-making, the company decides to recruit new Rifters from people who are already psychologically damaged - in other words: abuse victims, war vets, criminals, etc. This ends up working surprisingly well since these people, already used to living in constant stress, are better able to mentally handle the rift. Of course, this can (and does) lead to a bit of friction between the staff, seeing as they're all disturbed individuals. This becomes a recipe for disaster when, deep within the Juan de Fuca rift, an ancient microbe is discovered. One that has been isolated for over two billion years and that could mean the end of all life on the surface. And the people put in charge of containing it feel less and less connected to humanity every day...

Originally written by Watts as a trilogy of three novels: Starfish, Maelstrom, and βehemoth. However, due to Executive Meddling, βehemoth was split and published as βehemoth: β-Max and βehemoth: Seppuku. This, among with other troubles from the publisher, means that printed versions of the novels are hard to find in stores, so Watts ended up puting all the novels for free on his website

Tropes found in the Rifters Trilogy: