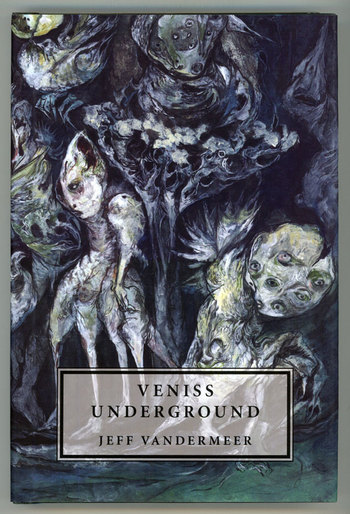 Quin is a child in the dark who teased the weave and warp of flesh into the medium of our desires.
Quin is the kiss in the dark from the creature you cannot quite glimpse from the corner of the eye — a cyberquick message sent from the light to the dark.
Quin is the sigh of anticipation on a lover's lips, foretaste of pleasure, surcease of pain, the end of matter.
Quin is the man living in the belly of a giant fish who remakes the world in his own image but is trapped in its jaws.

Veniss Underground is a novel by Jeff VanderMeer.

In the socially stratified future city of Veniss, where the very rich live in towering skyscrapers and the desperately poor are confined underground, rumor tells of an extraordinary shop which only the most well-connected can access: Quin's Shanghai Circus. Quin is a master of genetic engineering, and sells spectacularlly engineered organisms which can serve as aesthetic Living Art or functional Organic Technology. Most famous of all are his sentient humanoid meerkats, intelligent but humble creatures which live to serve.

The novel follows three characters: Nicholas, an unsuccessful holo artist; Nicola, his more responsible twin sister; and Shadrach, a mutual friend of the two who works for Quin. Falling into a slump after robbers steal his unsold artwork, Nicholas decides to seek out Quin's Shanghai Circus and buy a meerkat. When he fails to return, Nicola begins searching for him. And Shadrach, feeling responsible for directing Nicholas to Quin's Shanghai Circus, sets out to find Quin himself, in his lair deep underground, and demand answers.