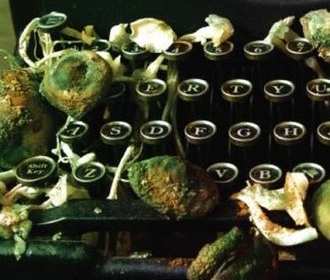 Figure 1: Janice Shriek's typewriter. As the reader can see from this photo, the typewriter keys had been infiltrated by mushrooms. Many of the keys were brittle and fell off within weeks of taking the machine out of the room at the Spore of the Gray Cap. The typewriter disintegrated entirely within five months.
Advertisement:

Ambergris is a substance produced in the digestive tracts of sperm whales, then regurgitated in a solid, waxy form. It possesses a dull gray color, sometimes black. It is flammable, and while first carrying an odor reminiscent of feces acquires a more pleasant scent as it ages, a sweet and earthy fragrance that has been compared to alcohol.

Ambergris is also the name of a city that serves as the setting for a series of books penned by Jeff VanderMeer which are known, for lack of a better title, as The Ambergris Cycle. The city itself possesses a dull gray color, although this is offset by the inordinate amounts of fungus which makes its home within the cracks and along the walls of the city's architecture. Mushrooms, lichens, molds and other fungi have taken over the city. Quite literally, in fact, for in addition to the city's human dwellers the underground of Ambergris houses the curious beings known only as the Gray Caps. They are Shrouded in Myth. Named for their distinctive headwear. Short of stature, origin a mystery. Rumored to control the fungus. To feed on it. To live in it. To be themselves mushroom creatures. They lurk in places too dark and dank for humans to venture, and they grow ever more bold in their contact with the world above.

The books which take place in Ambergris, by order of publication, are —

In 2020, the Ambergris stories have been collected into one collection that's simply called Ambergris. The arranged order inside are City of Saints and Madmen with the stories Dradin, In love, The Hoegbotton Guide to the Early History of the City of Ambergris, The Cage, The Transformation of Martin Lake and finally The Strange Case of X. Following those stories are Shriek: An Afterword and finally Finch.

Tropes present in the books of Ambergris

The Hoegbotton Guide to the Early History of Ambergris, by Duncan Shriek

City of Saints and Madmen