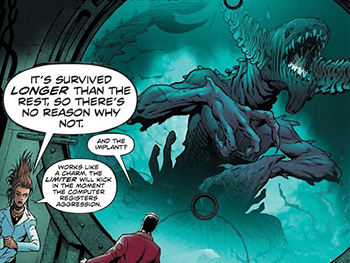 An Attack Animal is useful, but sometimes what nature provides is lacking. So you create your own attack animal, genetically engineering existing organisms or creating your own. Maybe add some cybernetics just to make it even stronger. Needless to say, this often backfires, proving that Genetic Engineering Is the New Nuke. Maybe this new organism would rather just be left alone, and refuses to actually fight. Maybe it goes feral and becomes a dangerous monster roaming the wilderness. Maybe it actually works perfectly, but those in charge of it are far from ethical.

A sub-trope of Living Weapon and Creating Life. The most horrifying examples will be Genetic Abominations. For the people who make these, see Maker of Monsters.