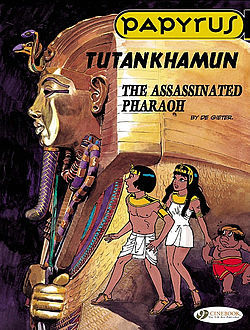 Papyrus is a Belgian comic book series, written and illustrated by Lucien DeGieter. The story takes place in Ancient Egypt. It was first published in 1974 in Spirou magazine in the form of episodes.

The daughter of the crocodile God Sobek has chosen Papyrus as the protector of Princess Theti-Cheri. He's been given a magical sword, the Sword of Sobek, commonly referred as a "glaive" (technically it's a "Khopesh"). Papyrus then moves to the palace under the watchful eye of the Pharaoh Merenptah. The comics has many stories with the Gods intervening, priests and nobles plotting, hostile neighbor countries invading, occasional road trips. It was mostly episodic and featured no story arcs.

An animated adaptation was created in 1998 that was two seasons (52 episodes) long and shown on TFOUTV in France and Radio-Canada in Quebec. In 2000 a video game was made for Game Boy developed by Dupuis and published by Ubisoft.