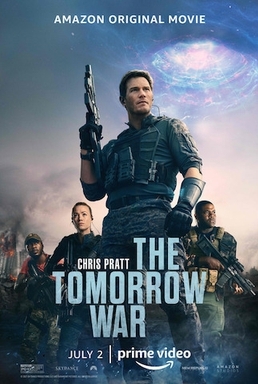 "Second chances are really hard to come by."
Advertisement:

In 2022, the world is shocked when a portal opens up and soldiers from the future step out, saying that humanity is facing annihilation from vicious aliens known as Whitespikes and that they are desperate for reinforcements. The world's governments send troops, only for them to be wiped out. Unwilling to commit more trained soldiers, but needing to support the war, a global draft is instituted. Draftees who manage to survive seven days get to come home. Among the draftees, James Daniel "Dan" Forester, Charlie and their field commander Muri Forester will prove to be humanity's unlikely hope against the Whitespikes.

The film's surprise success has led to Amazon greenlighting a sequel with plans for the original cast to return.