All spoilers for Mobile Suit Gundam SEED will be left unmarked.

Crew of the Minerva 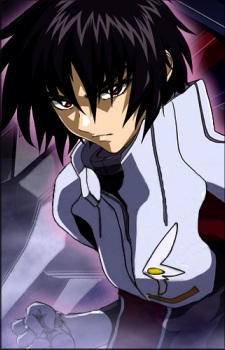 "Do you want to start another one?! Another war?!"

The series' initial protagonist. His family was killed attempting to flee when the Earth Alliance invaded Orb during the First Bloody Valentine War; he became a refugee and ended up in the PLANTs. He blames Orb (and the Athha family in particular) for their deaths, and carries a lot of hatred for both. He joined ZAFT and became a Redcoat alongside Rey Za Burrel and Lunamaria Hawke as the pilot of the Impulse, the Minerva's flagship Gundam.

Shinn has a problem with authority figures in general; he tends to lash out at his immediate superiors and resents being given orders. Due to this, he relies heavily on his peers for support; Rey acts as his moral compass, while Lunamaria eventually provides him with much-needed emotional support.

He pilots the ZGMF-X56S Impulse, a Combining Mecha with three Silhouette Packs which specialize in one combat aspect, and then the ZGMF-X42S Destiny, an all-around Gundam that proves to be one of the most powerful in the show. 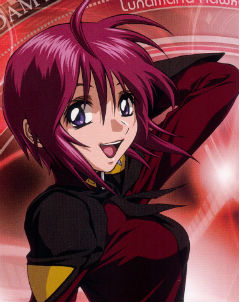 "I'm fine! I got defeated splendidly, though."

One of the Minerva trio of ZAFT Redcoats. She apparently comes from a totally normal background and family life, compared to the other two. "Luna" is cheerful and outgoing, and a "people person", which balances out her friend Shinn's frequently-wrathful disposition and their friend Rey's nigh-disturbing calmness. On the other hand, she can be a bit petty, insensitive, or oblivious, especially to subtle things or pessimistic emotions. Her younger sister, Meyrin, is one of the Minerva's Bridge Bunnies.

She is the pilot of a red ZGMF-1000 ZAKU Warrior and later inherits the Impulse after her ZAKU gets trashed and Shinn upgrades to the Destiny. 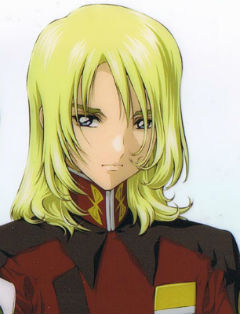 "Whatever kind of life it is — we want to keep on living, if we can."

The third of the Minerva's pilot trio. He is calm, stoic, and firmly loyal to Durandal — as well as a mentor to Shinn, providing some much-needed stability to offset Shinn's volatile emotions. When the others are confused, questioning, or doubtful, it's Rey who brings them back to focus on their mission. He also displays a penetrating intelligence and grasp of both tactics and strategy, which makes him a useful supporter and consultant for both Shinn and the Chairman.

He pilots a white ZGMF-1001/M Blaze ZAKU Phantom, performing the same function as Lunamaria (standing atop the Minerva and providing fire support). Eventually he gets his own Gundam — the ZGMF-X666S Legend — and begins to demonstrate exactly what he is capable of; he and Shinn provide most of the muscle for ZAFT in the later battles. 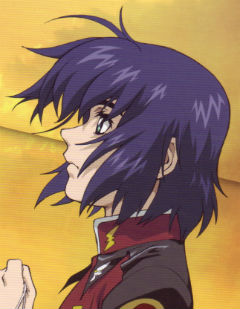 "My name... my name is Athrun Zala. I am the son of Patrick Zala, the man who fanned the flames of war and poisoned the whole world with his hatred. I believed what my father said. I fought in the war, I killed the enemy, I fought my best friend... and even when I realized how wrong he was, I couldn't stop him and I lost everything."

The true main protagonist of the series. A veteran of the first Bloody Valentine War, and an old friend (and enemy) of Kira Yamato's. He rejoins ZAFT when war breaks out once again and is assigned to the Minerva. His accomplishments and fame earn him the adoration of much of the crew, apart from the surly Shinn. He initially opposes his old friends on the Archangel, citing their actions as doing nothing but making the conflict worse.

He pilots the ZGMF-X23S Saviour while aboard the Minerva, a Transforming Mecha just like the Aegis from Mobile Suit Gundam SEED, and eventually obtains the ZGMF-X19A Infinite Justice, a melee-oriented Gundam and the Justice's spiritual successor. 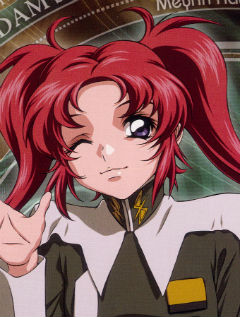 A Bridge Bunny on board the Minerva, and Lunamaria's little sister. Shy around people she doesn't know well, Meyrin is an important part of the bridge crew as the one in charge of communications, yet frequently gets overshadowed by her more outgoing older sister. Like Lunamaria, Meyrin also admires Athrun. 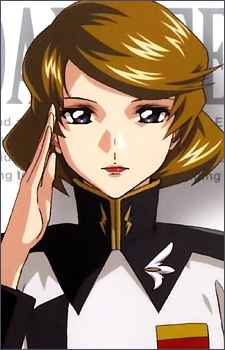 "War is a part of politics, in which the whole picture cannot be read."

Captain of the Minerva and Shinn's commanding officer. Tries very hard to be a fair commander, despite an increasing amount of stress and strain. Later revealed to be an old flame of Durandal's, she remains loyal to ZAFT and PLANT while her doubts continue to escalate. 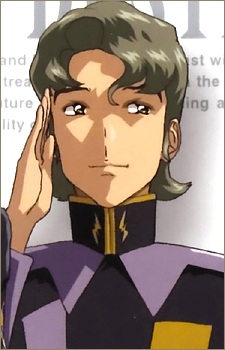 "I believe what the Chairman says about getting along with the Naturals, but if someone doesn't get shot, this war is never going to end."

Talia's second-in-command, Arthur is a likeable and competent, if remarkably panicky executive officer. Totally loyal to Captain Gladys, he has a good rapport with Shinn and the other pilots.

Two technicians stationed aboard the Minerva and close friends with Meyrin and the Minerva's ace pilots. 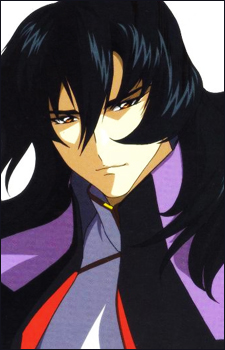 "Power is necessary because there will always be conflict."

Durandal, the new PLANT Supreme Council Chairman, is a supposed moderate who believes Naturals and Coordinators can live in peace. He is a mentor figure towards the crew of the Minerva, and often talks about his plans for a better tomorrow. He also seems to be a bit of a fatalist and rarely explains anything directly, keeping his motives unclear for much of the series. By the end it is revealed that he seeks to impose a genetic determinist dictatorship over humanity in an effort at preventing any more apocalyptic wars. 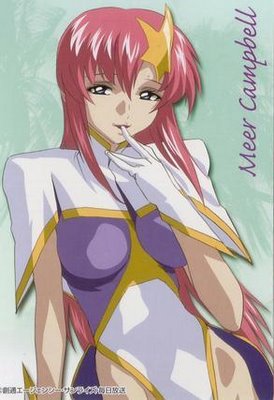 An ordinary PLANT civilian and huge fan of Lacus Clyne, 17 year old Meer is chosen to get plastic surgery and replace Lacus after she goes into hiatus, as she shares her idol's abilities and voice. While she appears naive and somewhat less than brilliant, it's uncertain how much of this is real, how much is part of her flawed impersonation of Lacus, and how much is self-serving to either deny responsibility for her actions, protect herself from others, see where this whole act will take her, or a mix of all of the above. As the series progresses, she becomes less and less sure of herself and her role. 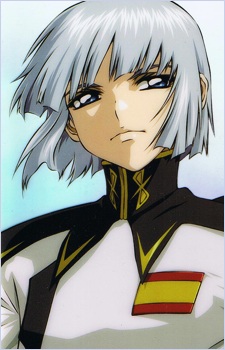 "Dearka and me? We probably should have died a long time ago."

A member of the Le Creuset Team along with Athrun and Dearka in the first Bloody Valentine war, he was the only member of the team to remain loyal to ZAFT throughout the conflict. Now commanding his own forces as a Whitecoat, he does his best to defend the PLANTs without repeating the mistakes of his past. A relatively minor character in most of Destiny, he spends most of the series Out of Focus. 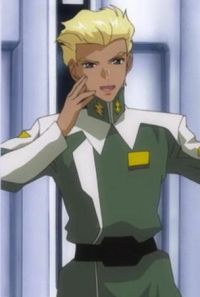 Another veteran of the Le Creuset Team, he defected to the Three Ships Alliance near the end of the first Bloody Valentine war. Though accepted back into ZAFT, he was stripped of his red coat, and now acts as Yzak's Number Two. Like Yzak, he's only a minor character in Destiny, remaining mostly Out of Focus. 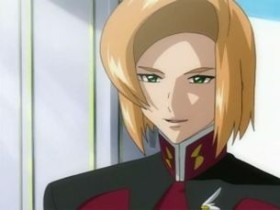 A ZAFT Redcoat and member of FAITH, he's assigned to the Minerva partway through the war. A survivor of the First Bloody Valentine conflict, he maintains a more optimistic attitude than Athrun, and tries his best to balance his fellow veteran's cynicism, while making friends with Shinn, Rey and the rest of the crew. He pilots a Blaze ZAKU Phantom, and then a ZGMF-X200 GOUF Ignited. 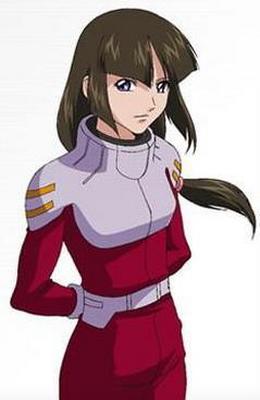 A ZAFT Redcoat and a member of the Joule Team, she joined Yzak during the Battle of Jachin Due at the conclusion of SEED. She continues to serve under him in Destiny. She never really interacts with the rest of the cast, and has no dialoguenote those voice credits are from a video game, but can often be seen by Yzak's side. Despite her apparent non-role, she has quite a devoted fanbase, and has more major roles in side materials.