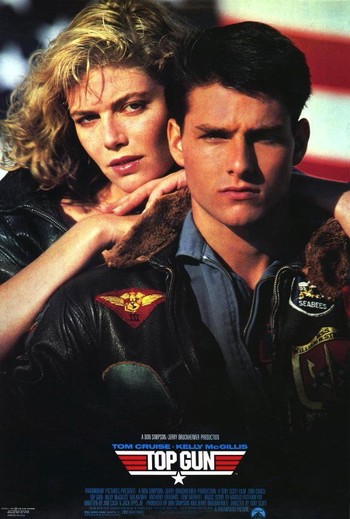 The movie in which Tom Cruise flies F-14 Tomcats and gives the Commies the finger while playing volleyball.

OK, a bit more detail. Top Gun (1986) was inspired by a magazine article on Navy pilots. The screenwriters and director Tony Scott viewed it as "Sports Movie meets jets". In it, hotshot pilot Peter "Maverick" Mitchell (Cruise) is sent to the TOPGUNnote  Which is the actual name of the real-life school - all caps, no space Naval Aviation training school, a five-week workshop where pilots learn how to really kick ass in an Old-School Dogfight. Here Maverick has to deal with competition from fellow pilots, and conquer his own demons, while still finding time to romance his civilian instructor Charlotte (Kelly McGillis).

The film had full cooperation from the Pentagon, and much of its aerial combat was shot "reel for real" using actual Navy hardware. (So real, somebody died making it.) It was an unanticipated success and caused an immediate boost in Navy enlistment figures, to the point that they started putting recruiting booths right there in the theatre.

In 1993, a Top Gun steel inverted roller coaster opened up at Paramount's Great America (now California's Great America) in Santa Clara, California, US, featuring music and voice lines from the film in the queue area. When Paramount sold the theme park to Cedar Fair, the Top Gun branding was removed and the coaster was renamed to Flight Deck.

A long-awaited sequel, Top Gun: Maverick, is due for release in 2022.

Son, your ego's writing examples that your tropes can't cash:

Johnson: Two of your snot-nosed jockeys were browsing TV Tropes Wiki at over 400 knots! I want somebody's butt! I want it now! I've had it!

I WANT SOME BUTTS!!!