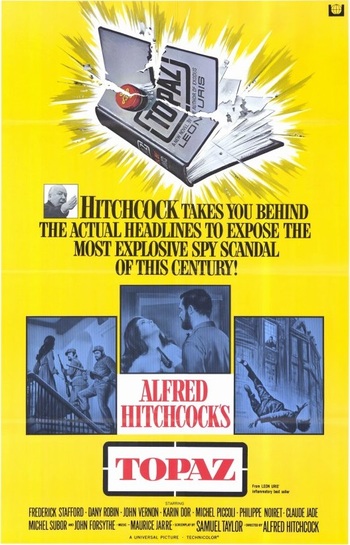 Topaz is a 1969 spy film directed by Alfred Hitchcock, adapted from the 1967 novel of the same name by Leon Uris and loosely based on the events leading to the Cuban Missile Crisis.

The year is 1962. In Copenhagen, high-ranking KGB officer Boris Kusenov (Per-Axel Arosenius) defects to the United States with his wife and daughter, assisted by American intelligence bigwig Michael Nordstrom (John Forsythe). Kusenov informs the CIA that the Soviets are positioning missiles in Cuba. (In real life, they were intermediate-range ballistic nuclear missiles with the ability to strike most of the continental United States). Nordstrom asks André Devereaux (Frederick Stafford), a French agent, to go to New York City and inflitrate Cuba's United Nations delegation.

Fortunately, he has an excuse to be in New York: his daughter Michelle Devereaux (Claude Jade) has just married journalist Francois Picard (Michel Subor), and they happen to be honeymooning there. The Cubans are staying at a hotel in Harlem and André is too white to pass as a local, so he drafts a black Deep Cover Agent, Philippe Dubois (Roscoe Lee Browne), to help out. Dubois manages to slip under the nose of Cuban revolutionary Rico Parra (John Vernon) and get photos of significant documents. With the documents in hand, Devereaux next flies to Cuba, getting in touch with his local mistress Juanita de Cordoba (Karin Dor).

Juanita happens to be the leader of the local underground resistance network. She attempts to have her network photograph the missiles. It results in her people getting arrested and tortured, with Juanita herself executed. After escaping Cuba with his life, Devereaux learns of two important events. First, information about his movements was leaked by a Soviet spy ring within the French intelligence service called "Topaz". Second, his wife Nicole (Dany Robin) has found out about his relationship with Juanita and left him. Devereaux must now figure out which of his colleagues are Double Agents, and save his marriage.

Notable for having three vastly different endings filmed. The one involving a suicide was the compromise ending between Universal and Hitchcock after the first two endings were rejected. Another one, involving an airport, was released in England by accident in the original run. The film was a modest box office hit, but is generally considered to be one of Hitch's weaker, dare we say, more boring films. One of its most memorable features is its lack of big name Hollywood stars. Instead, Hitchcock assembled an Ensemble Cast of mostly then-famous European actors. Frederick Stafford had rose to fame for portraying agent OSS 117 in two films. Dany Robin had rose to fame in the 1950s and co-starred in The Waltz of the Toreadors. Her career was fading by the time she played in Topaz, and it was to be her last film. Karin Dor had rose to fame by starring in film adaptations of the works of Edgar Wallace and Karl May. She had also played Dark Chick Helga Brandt in You Only Live Twice. Claude Jade was the protagonist of the hit Stolen Kisses (1968) by François Truffaut and was at the beginning of a lengthy career. Finally, Michel Subor had gained his fame for playing in films such as Please, Not Now! (1961), The Little Soldier (1963) and What's New Pussycat? (1965).

"Col. Kusenov, does the word 'Trope' mean anything to you?":